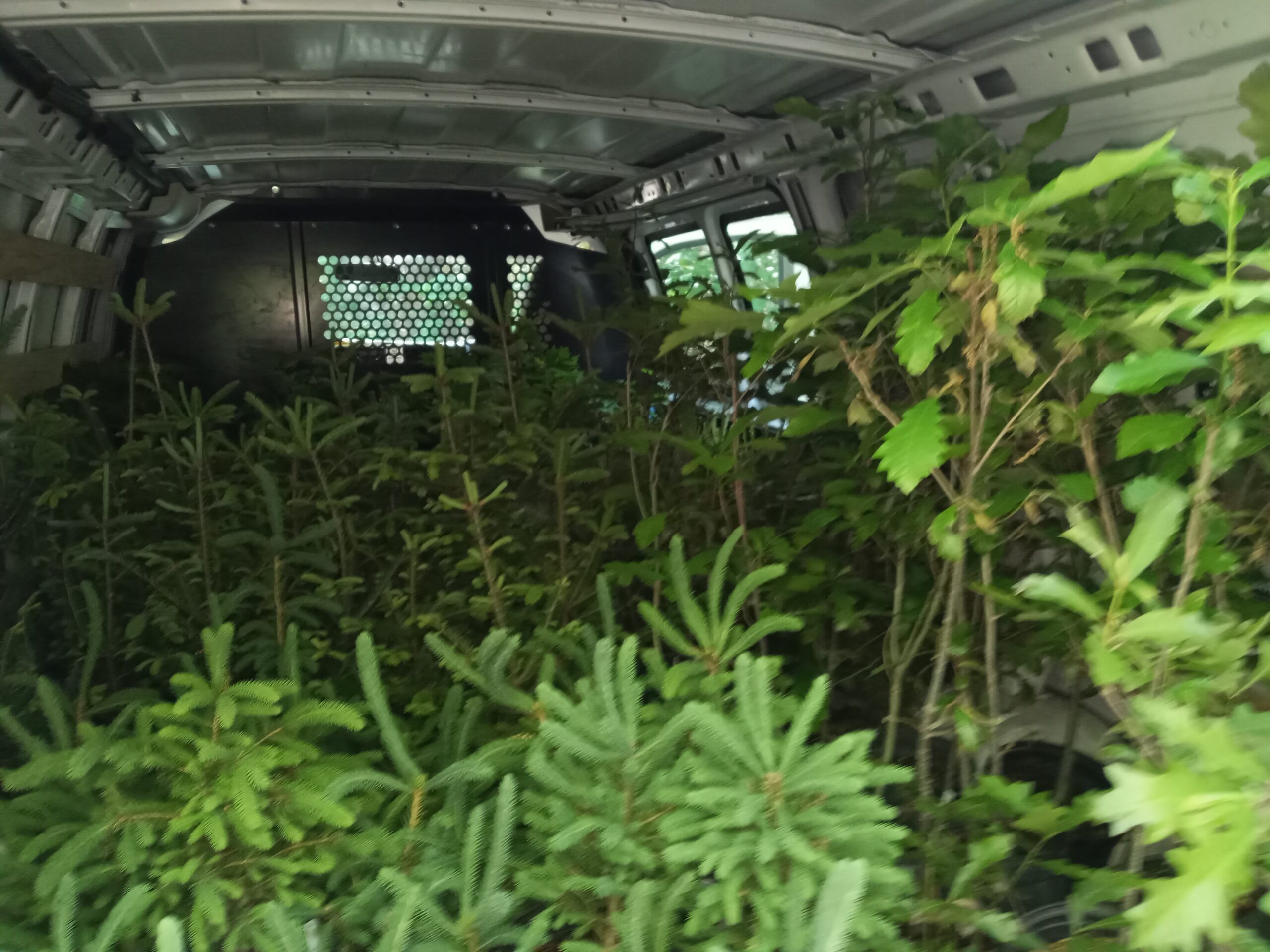 Sunday, June 5th, 2022 – Tashi Gatsel Ling Board Member, Tom Cannon was asked to speak to the Maine Youth Leadership Project and distribute 120 evergreen saplings on behalf of TGL with the support of Dakini Rising. This enabled the approximately 60 Maine high school sophomore students to learn about the importance of helping our environment breathe with the help of trees and how to plant and care for the trees after they took the saplings home.

Following the presentation, students were asked to go outside the building and select a tree or two to bring home with them. They were encouraged to share their story with us when they were able to put the tree into the ground and each student was provided with suggestions on how to involve the community in their tree planting event.

Students were very enthusiastic and excited to be involved in this project, and it was such a pleasure to watch these future leaders walk away with one or two trees of their own to plant and nourish. Overall it was a great success and we are hoping we can replicate this in future years. 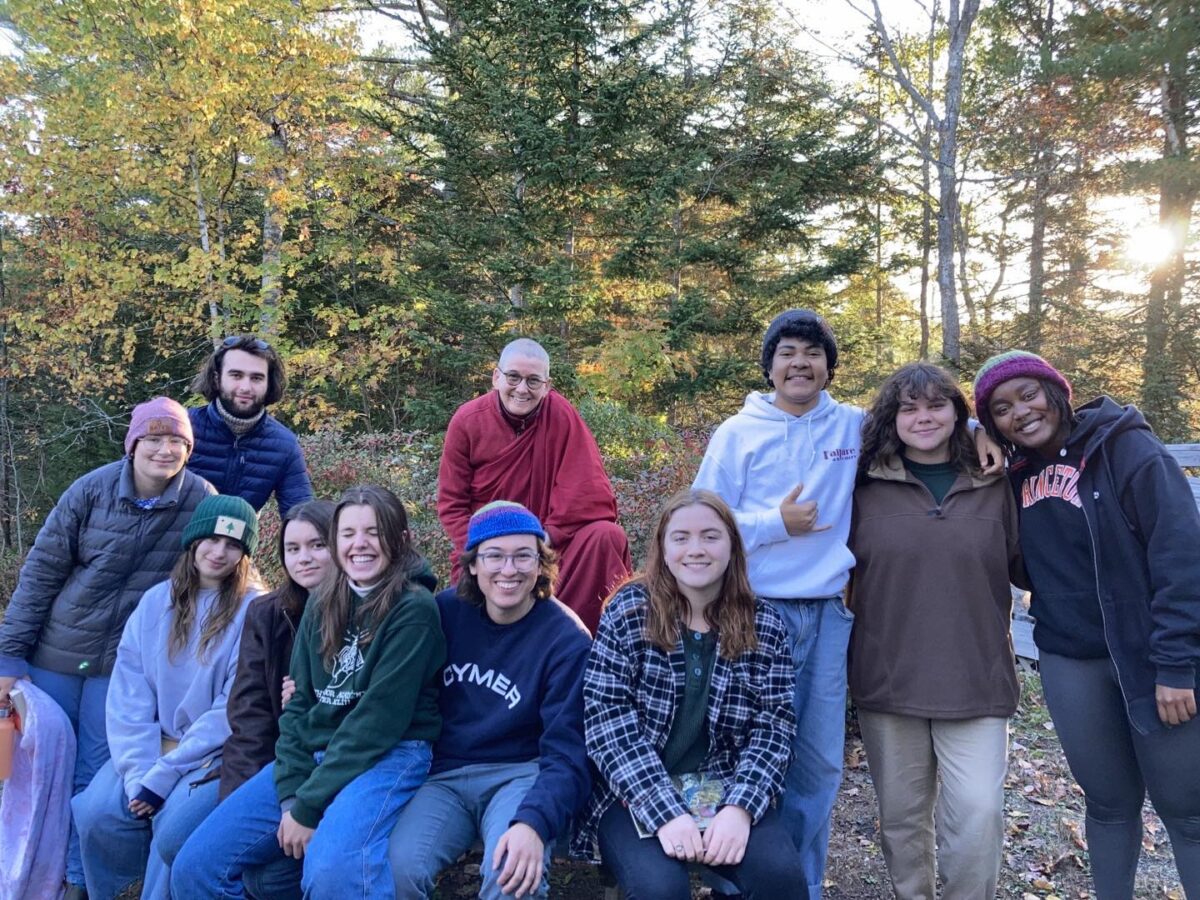 When I went to commons right before closing on Friday night with Abbey Ende ‘23, Barry Kilmister ‘24 and Whitney Miller ‘26, Abbey turned to us and asked, “How are you guys going to explain what we just experienced?” I didn’t have an answer at the time, but I’m going to try now.

I spent three days in the woods with the Buddhist nun Tenzin Dasel ‘88. I’d mentioned this plan the week before I left campus to friends, who frowned in concern about the parallels between this concept and many horror movie premises. I drove my own car to Shortridge for the dual reasons of helping Barry bring our food and being able to leave if it was terrible. But it was not terrible. Honestly, this trip may have changed my life.

I had never meditated in my life. I’d always been the sort of person who did things very quickly or not at all, and who had a medically concerning high resting heart rate. But when I was having dinner with Maggie McCulloch ‘23, Joel Hallkaj ‘24 and Barry, I mentioned that I didn’t know what to do for break, and Maggie said, “just come on the meditation retreat with us.” I decided at the very least it would make for an interesting story.

I had no idea what I was in for. While I drove Bora Legunda ‘25, she read the itinerary out to me. My initial concern was over the 6:15 a.m. wake up to go to the beach to watch the sunrise. I’ve never been a morning person, but as it turns out, a nun standing in your doorway in the early morning really will get you out of bed.

We weren’t allowed to have our phones, so we spent our free time reading and talking and cooking. I woke up the last morning to laughter and I came downstairs to everyone sitting around in the living room. We all got so close so immediately, which weirdly reminded me of the Netflix reality TV show Too Hot To Handle, in which the cast gets so close so quickly. I remember thinking that seemed scripted but now I understand how quickly people can be pushed together in an isolated environment like that.

When Tenzin told us we were supposed to have a silent day, where we communicate only with our eyes and hand gestures, I wasn’t sure what to expect. I had come on this trip to hang out with my friends, so I wasn’t super thrilled about not being able to talk for a third of it. But I weirdly loved it.

Anyone will tell you, I talk a lot. I spent my whole childhood monologuing; my little brother was rumored to not have spoken a word for the first few years of his life because he just couldn’t get a word in. But I found I was able to communicate just as much, if not more, without words. We held hands and smiled and were able to somehow have full conversations with our eyes. It felt as though we were living in a peaceful silent film.

Barry and I found pieces of wood shaped like rocks and skipped them in the ocean. Joel and Maggie and I watched the stars and I had never seen a sky that open. I wrote twelve pages in my journal in the sand. I thought about how much we speak just to fill the silence. Things would come up throughout the day that I felt like I needed to communicate, until I sat and thought and realized that so many of the things we say aren’t as pressing as we think they are. I kept thinking about how much love can be communicated with physical touch and facial expressions, and how the concepts that can only be communicated with words tend to only complicate things.

Don’t get me wrong, I will not be becoming a Buddhist nun. Tenzin, too, said she never thought she’d end up as a nun when she was at Bates (she literally played lacrosse with my mom at Bates!). But I have been meditating every day since I’ve been back on campus, and I feel like I don’t need to handle everything all at once in the same way I used to. Not everything is as pressing as we think it is, and I’ve been trying to take more time for myself. I visited my neighbor/friend Amelia Killackey ‘25 last night and she observed, “Your voice even sounds calmer.”

Everyone should come out to meditation club. Meditating works. I hate that my dad who’s been telling me to meditate for years was right about that.

What is today called Tashi Gatsel Ling Buddhist Center has maintained a presence in Maine since the mid-90’s when the Buddhist monk called Lobsang Tsetan began teaching in Joli Green’s art studio in Freeport.  The shrine room and meditation space has moved several times since then to accommodate changing circumstances: to Pownal, back to Freeport, and now is presently housed in Gray.

We are again facing a relocation challenge to locate a new space in Maine to temporarily host the shrine (consecrated by Khensur Rinpoche). It needn’t be a large space, but does need to be secure, dry, pure, and easy to maintain. TGL BC is hoping to find a situation offered freely as dana (or generous giving).  It would also be beneficial if there is a small space for an ordained Tibetan Buddhist nun to stay on occasion as well.  Please contact tglmaine@gmail.com.

In an effort to reach a larger audience and create our presence across the various social media platforms, the TGL team is happy to announce that we are now on Instagram @tashigatselling. Our attempt is to create engaging content in support of our center and the Dharma.

You can listen in here: New Year with Jetsunma

Jetsunma Tenzin Palmo is a bhikṣuṇī and leading master in the Drukpa Lineage of the Kagyu school of Tibetan Buddhism. She is an author, teacher, and founder of the Dongyu Gatsal Ling Nunnery in Himachal Pradesh, India.

We are happy to let you know that Tashi Gatsel Ling Buddhist Center is now registered with Amazon Smile. As a result, once our supporters select us as the charity of choice, Amazon will now donate 0.5% of the price of eligible smile.amazon.com purchases.

Tashi Gatsel Ling Buddhist Center of Maine is delighted to be the first Dharma center in the United States to invite two Geshe Mas in January 2022 for a month long visiting teachers role. The Geshe degree was traditionally only awarded to males, but under the guidance of His Holiness the XIV Dalai Lama, the first class of Tibetan and Himalayan females graduated with this degree after 20 years of study. Comparable to a PhD in the west, they hold Doctor of Buddhist Philosophy as well as high tantric studies. Please read more about this at Lions Roar  and see more photos here.

Please join us in making this “Female First” a memorable event and amazing start to 2022. We are raising $5,000 to cover the airfare and their expenses while here and greatly appreciate your support. Your generous act of Dana will help authentic Vajrayana Buddhism continue to take seed in the west through ordained female sangha teachers guiding the way. Thank you for your kindness and support.

TGLBC had a wonderful community clean up, the entire length of Town Farm Rd, in Gray and through North Yarmouth. We rejoice in sharing these heartfelt efforts in our daily commitment to living in harmony and simply upon the earth. And in sharing the responsibility to take very good care of ourselves and all mother beings.

We covered both sides of the road and are happy to likewise draw attention and support to the COP26 Climate Change Conference happening now in Glasgow, Scotland. Everyone has a role to play. As Buddhist practitioners, we likewise care for the Earth Goddess. The Earth Goddess is present in the appearance of the Buddha in Earth touching mudra, His right hand over the right knee, middle finger touching the earth. When faced with the threat from Mara, the character who represents the fear of doubt, unworthiness and insignificance, Siddhartha called upon the earth goddess to bear witness to His attainment of enlightenment. Therefore, we who follow Buddha’s teachings of Dharma should likewise pay special attention to supporting the earth goddess and all mother beings.

Lhabab Duchen is Buddha’s Descent Day. The 22nd of the ninth month of the Tibetan calendar is the day when Shakyamuni Buddha returned to the world from the God Realm of Thirty-Three after sharing the Dharma with the gods and his mother.  This is one of the four great holy days of the Tibetan calendar and is a Buddha Multiplying Day when karmic actions are one hundred million times stronger.

This day is considered to be very auspicious for practice. To celebrate the occasion we will have a special program. Venerable Tenzin Dasel will offer a guided meditation, mantra recitation, and a short clip of the Khandro Cham, or Dakini Dances, being held at Dongyu Gatsal Ling Nunnery in India earlier that day.

Our special  Lhabab Duchen evening puja is being offered specifically for Tashi Gatsel Ling Buddhist Center to expand our offerings of the genuine Dharma for the benefit of all  members and all mother beings near and far.  All Dana offered during this auspicious occasion is especially beneficial and appreciated.  Offer your Dana here.