Tenzin reports on Tibet.net on His Holiness the Dalai Lama’s New Year message to Tibetans inside Tibet and those in exile.

To read the full article and to watch the full video message access this link.

We are coming prepared to discuss the first chapter (The Lightning Flash, p. 1-12) of Peaceful Mind, by Khen Rinpoche Lobzang Tsetan. You can get this book at TGL for a $20 donation.

In January we started discussing the first part of The Essense of Tibetan Buddhism, by Lama Thubten Yeshe: the teaching on Renunciation, Bodhicitta, and Emptiness. We will continue the discussion on February 3rd with the second part on Tantra.

Books are available at Tashi Gatsel Ling for a small donation or you can download the e-book for free here.

Losar is the Tibetan New Year’s celebration.  We will celebrate on Feb 7th this year.  Join us to experience the wonderful vibrations of group mantra chanting. Please come ready to recite the Heart Sutra, participate in a simple Vajrasattva purification practice (both in English & Tibetan),  set Dharma intentions and recite mantras as a group to celebrate Losar.

Whether you are a seasoned practitioner or new to Buddhism, this is a meaningful way to welcome in the Tibetan New Year. If you have a mala (prayer beads), please bring it. Please bring an offering like flowers, fruit, nuts, chocolate or baked goods for the shrine.

If you would like to bring a snack to share afterwards, you are welcome to do so, but it is not required.

Please RSVP if possible to Doreen at  perley@maine.rr.com so we can have the correct preparations on hand! Thank you.

TGL will host Venerable Thukten Dema this weekend. She will join this Sunday’s book discussion, then later on Sunday, January 6, from 2-4 pm, we will have a Dharma talk, meditation, and a meet and greet tea with Venerable Dema.

Ven. Thukten Dema was born in small village in Bhutan called Gelephu. She is 32 years old and 15 out of those she dedicated to the monastic life. she resides at Jangchub Choeling Nunnery in Southern India. Ven. Dema is studying at Emory University as a Tenzin Gyatso Science Scholar. She thoroughly enjoys observing nature.

Tashi Gatsel Ling will host a New Year’s Meditation and Potluck on January 1, 2019, from10:30 – 12 noon. We invite you to come and set intentions and prayers for a healthy, happy start to our Western New Year 2019 and to rejoice in good company. Please bring a dish to share. 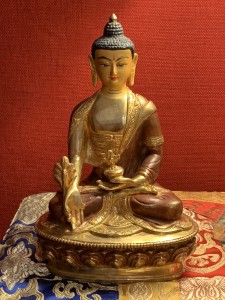 Medicine Buddha Puja (Prayer ritual) is offered for healing and world peace.  Please bring flowers, fruit, a healthy treat, or chocolate to offer, which we will all share in at the end of the puja.  We recite in English and all are welcome. 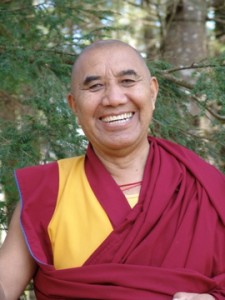 MAINE
Sunday, March 19 – 10:00a-12:30p, Curtis Memorial Library in Brunswick
The Eight Verses for Training the Mind—A Powerful Practice for Transforming  Difficult Circumstances
Almost one thousand years ago the great Indian teacher Atisha came to Tibet and began giving personal instructions to his Tibetan students. These instructions formed the basis for the Tibetan Mahayana tradition of training the mind called lojong. In these turbulent times, these teachings help us to remain peaceful by keeping us focused on compassion and altruism. Khen Rinpoche will share with us his insight into one of the most famous mind training texts, Langri Thangpa’s Eight Verses on Mind Training. Whether you are a beginner or long-time student, listening to these teachings from Rinpoche will help you to take both your hardships and successes into the path and maintain a balanced and joyful state of mind. This event is free.

MAINE
Sunday, March 26 – 10am-12:30p, Curtis Memorial Library in Brunswick
Tong-len – The Practice of Taking and Giving
Knowing the importance of altruistic love and compassion for all living beings (Bodhicitta) is crucial. Taking this wisdom to heart and manifesting it in all our affairs can be quite challenging. Fortunately, Tong-len meditation is an amazing tool to help us along the path. Khen Rinpoche will teach us how to take on the suffering of others and give our own happiness to them. It is a powerful way to generate Bodhicitta and, in the process, transform our own minds to be more peaceful, joyous, and free. This event is free.

NEW YORK CITY
Wednesday, March 29 – 6pm, Rubin Museum, NYC
Art Walk and Commentary
Join Khen Rinpoche and RMA Curator Elena Pakhoutova for a walk through the main gallery with an eye on pieces connected to Ladakh, Rinpoche’s homeland, and the Gelukpa tradition, Rinpoche’s monastic lineage. Rinpoche and Elena offer us a chance to enjoy these meaningful works with the benefit of their commentary. This event is free and requires and RSVP. Please email: laura.kozaitis@ourssp.org with “RSVP for March 29 Rubin Museum Event.” Thank you.

Osher Hall, Maine College of Art, 522 Congress St, Portland, ME
Khen Rinpoche will share the story and historical facts of the Buddha’s life, from his early years as Prince Siddhartha to his enlightenment, teaching, and passing. Rinpoche will introduce the key principals of the Buddha’s teachings including the Four Noble Truths, the Eightfold Path to Enlightenment, and the Five Noble Precepts. Participants will learn the nature of karma, and the distinction between rebirth in Buddhist philosophy and reincarnation as it is envisioned in Hinduism and other religions.  Rinpoche will speak about the history of Buddhist philosophy in the 2,500 years since its inception and the differences among the three main branches into which Buddhism has evolved. Participants will have the opportunity to consider the nature of Nirvana and Enlightenment, and the distinction between the two.

Maine Coast Waldorf School (formerly Merriconeag), 57 Desert Rd, Freeport, ME
Contemplation and meditation on death and impermanence are regarded as very important in Buddhism for two reasons : (1) it is only by recognizing how precious and how short life is, that we are most likely to make it meaningful and to live it fully and (2) by understanding the death process and familiarizing ourselves with it, we can remove fear at the time of death and ensure a good rebirth. Khen Rinpoche will emphasize that while contemplating death may not bring enlightenment to everyone, there is no doubt that enhancing our awareness has many benefits. Instead of attempting to hide from death, we may be able to look to it as a teacher (please bring a meditation cushion if you would like to sit on the floor; chairs are provided).

*Because Khen Rinpoche is having a knee replacement in May, his mobility and energy are limited during this visit. Rinpoche regrets that he is not able to have private appointments, to go visit people as he usually does or to stay after the teachings for long chats.