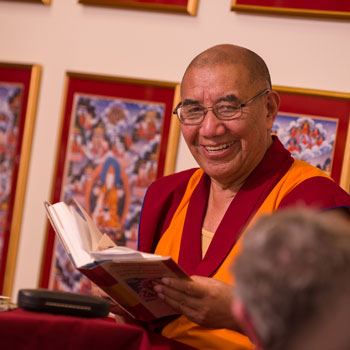 HE Kyabje Khenzur Rinpoche Kachen Lobzang Tsetan is a Tibetan Buddhist monk from Ladakh, India who has been traveling and teaching in the United States for over thirty years. He began his monastic life at age seven in Stok, his family village in Ladakh, India. At age thirteen he joined the Stok Monastery to study and memorize Buddhist scriptures. In 1952, when he was fifteen years old, he walked 800 miles with his father from Ladakh to Shigatse, Tibet to enter the renowned Tashi Lhunpo Monastery. Rinpoche received his novice monk vows there and studied Buddhist philosophy at the monastery’s Skilkhang College with many prominent Tibetan scholars.

His dream was to receive the Geshe degree in Buddhist philosophy, roughly equivalent to a Ph.D. This dream was deferred for him when the Chinese government intensified their policy of cultural genocide on occupied Tibet in 1959, so Rinpoche escaped to his homeland in 1960. Back in the village of his birth, he studied tantric practices and then joined the School of Buddhist Philosophy in Choglamsar for seven years. Following this Rinpoche went to Varanasi, India, where many high lamas in exile had resettled and built new monastic colleges, and received his Shastri degree, the equivalent of a bachelor’s degree. Afterward, he felt a responsibility to return to Stok and contribute to the community through teaching, so from 1974-1978 Rinpoche taught high school in Ladakh. Then he received a special invitation to come to the United States and teach at the first Tibetan Buddhist learning center in America, Labsum Shedrub Ling in Washington, New Jersey. He went in hopes of learning English and completing his Geshe degree studies. He accomplished both, and in 1984 returned to the Drepung Monastery for commencement.

Since that time Rinpoche has been traveling and teaching in the United States for part of the year, and returning to Ladakh during the summer months to oversee activities at the Siddhartha School and later at the monastery. His association with the Manjushri Center in Amherst and other connections have provided him with extensive teaching positions and lecturing opportunities at a number of schools including Smith, Bowdoin, Amherst, Hampshire, Drew, Maine College of Art, Bangor Theological Seminary, Phillips Exeter Academy, Deerfield Academy, Stanford, and others.

In 1995, Rinpoche founded The Siddhartha School in his home village in Stok, Ladakh. The school seeks to preserve Tibetan Buddhist Culture and language while giving the children of this remote Himalayan area a well-rounded education, which allows them to represent themselves and their culture in our rapidly evolving global community.

In 1996, shortly after he founded the school, H.H. Dalai Lama, appointed Rinpoche to be the head abbot of the newly reestablished Tashi Lhunpo Monastery in India. (This is in the absence of the 11th Panchen Lama, one of Tibet’s most revered reincarnating masters and traditionally Tashi Lhunpo’s abbot, who has been missing since the Chinese Government took him and his family into custody when he was 4 years old.)  Ven. Khen Rinpoche humbly set aside this great honor, with the Dalai Lama’s blessings and support, so that he could devote himself completely to the Siddhartha School. However, in 2005 His Holiness again asked Rinpoche to accept the abbot position, and this time he could not refuse. In July 2005 Rinpoche was installed as Kachen or head abbot, of the Tashi Lhunpo Monastery in southern India.

Tsunma Tenzin Dasel is the lead teacher and meditation guide at her home center Tashi Gatsel Ling in Maine, USA. She collaborates with several ME high schools to give talks on Buddhism and guides meditation for the students and teachers. She returns to TGL once a year.

Jetsunma Tenzin Palmo is a bhikṣuṇī in the Drukpa Lineage of the Kagyu school of Tibetan Buddhism. She is an author, teacher, and founder of the Dongyu Gatsal Ling Nunnery in Himachal Pradesh, India.

Jetsunma is one of the first Western women to be ordained as a Tibetan Buddhist nun. A woman’s rights activist, she has spent 12 years in strict retreat in one of the Himalayan caves, authored books, opened a nunnery, and vowed enlightenment.

To find out more about Jetsunma Tenzin Palmo’s life, read Vicki Mackenzie’s biography Cave in the Snow published by Bloomsbury, and see the ‘Cave in the Snow’ DVD directed by Liz Thompson and narrated by Rachel Ward. 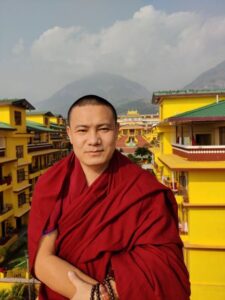 Rinpoche Palden Sengye was born in Lhasa, Tibet in 1987. He fled to India in 1993, and under the compassionate grace of His Holiness the Dalai Lama, was given an opportunity to study at TCV school. In 1998, His Holiness recognized him as the 7th reincarnation of Palden Sengye Rinpoche of Tashi Lhunpo monastery. During that same year, he began receiving his monastic education, and soon after, he observed the novice vows. At the age of 20, he received the complete vows of a monk.

Rinpoche underwent a rigorous study on the five treatises for many years and took part in the various examinations conducted by Gelugpa Universities. In 2019, he was awarded the “Kachen Rapjampa Degree” and subsequently the Geshe “Lharampa Degree” in 2020; this is the equivalent of PhD at the universities the world over. Since then, he has been serving as a teacher at the Tashi Lhunpo monastery. Currently, he is studying at the Gyuto Tantric Monastic University at Dharamsala to undertake one-year courses on the Tantric (also known as Vajrayana) Buddhist study. 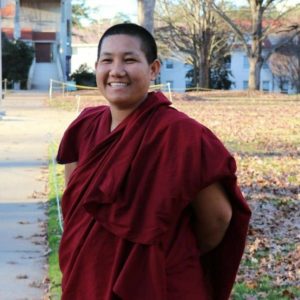 Ven. Thukten Dema was born in a small village in Bhutan called Gelephu. She is 32 years old and 15 out of those she dedicated to the monastic life. Currently, she resides at Jangchub Choeling Nunnery in Southern India. Ven. Dema is studying at Emory University as a Tenzin Gyatso Science Scholar. She thoroughly enjoys observing nature. 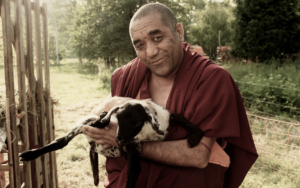 Geshe Tsewang Dorje was born in Stok, Ladakh in 1966. As a boy, he joined the village monastery and in 1978 he was enrolled at Sera Monastery (one of the four great monastic colleges in Tibetan Buddhism) to further his study of Buddhist philosophy and take vows from His Holiness the Dalai Lama and Ling Rinpoche (tutor of His Holiness the Dalai Lama). In 1998, he was bestowed the highest degree of the monastic college, a Geshe Lharampa (Ph.D.), and later he was appointed philosophy Lecturer in Kopan Monastery Nepal for 3 years. From 2000 – 2003, Gesha-la served on the Committee For Sera Philosophical Studies & Board of Examinations. In 2009, he became the first Ladakhi Monk to ever be elected to the post of Geko (similar to an academic dean) of Sera Monastery and the Gyumet Tantric College. Geshe-la teaches at several dharma centers in the international Buddhist Community, including Theken Choling in Singapore and a Vietnamese Monastery in San Francisco. At present, Geshe Tsewang is the Director and President of Ngari Institute of Buddhist Dialectics and formerly was Director of the Siddhartha School. 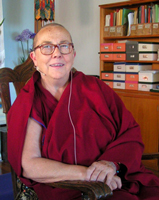 Venerable Robina Courtin was ordained in the late 1970s. Since then she has worked full time for Lama Thubten Yeshe and Lama Zopa Rinpoche’s FPMT. Over the years she has served as editorial director of Wisdom Publications, editor of Mandala Magazine, executive director of Liberation Prison Project, and as a touring teacher of Buddhism. Her life and work with prisoners have been featured in the documentary films Chasing Buddha and Key to Freedom.

Geshe Ngawang Tenley was born in 1969 and in 1989 began preparation to become a monk under the guidance of his uncle, Geshe Tsulga. He was ordained by the late Gyume Khensur Geshe Urgyen Tseten Rinpoche in 1990 and began the program of studies to become a geshe at Sera Je Monastery. During the course of his studies, he has received many teachings from His Holiness the Dalai Lama as well as other highly qualified masters. In 1998, he received his full ordination (gelong) vows from His Holiness, and in November 2008, after eighteen years of rigorous studies, he completed his final exams to be conferred the Geshe degree at Sera Je Monastery. He began teaching at Kurukulla Center in 2009 and was appointed the resident teacher by Lama Zopa Rinpoche in 2010 following the passing away of Geshe Tsulga. His cheerfulness and humility endeared him to everyone he meets.

Lama Willa Miller has studied and practiced in the Tibetan Buddhist tradition for the last twenty years in the non-sectarian Kagyu, Nyingma and Shangpa lineages of Tibetan Buddhism. Her teachers and guides have included Kalu Rinpoche, Bokar Rinpoche, Dilgo Khentse Rinpoche, Khenpo Tsultrim Gyamtso Rinpoche, Lama Norlha Rinpoche, Lama John Makransky and others. She completed two traditional Three Year Retreats in the nineties, was authorized as a lama [Buddhist minister] in 1999, and teaches Tibetan Buddhist practice, meditation, and yoga in the Northeast. Her teaching specialties include natural meditation (Mahamudra), heart-cultivation (lojong), deity practice, and practices for deep retreat. She is interested in the practical integration of meditation into daily life, and the power of nature to inspire authentic presence. She is the author of Everyday Dharma: Seven Weeks to Finding the Buddha in You (Quest Books), and the Arts of Contemplative Care (Wisdom Publications), and is the Founder and Spiritual Director of Natural Dharma Fellowship and Wonderwell Mountain Refuge. She is a Visiting Lecturer in Buddhist Ministry at Harvard Divinity School and has a Ph.D. from Harvard University.